Welcome to the Age of E-Operations Management 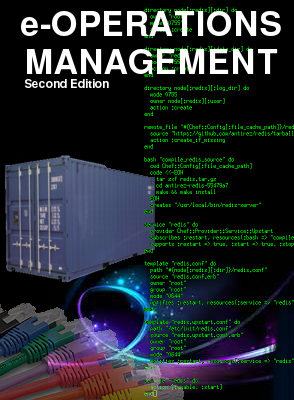 DevOps has often been criticized for drawing too strongly from manufacturing metaphors.  SRE, DevOps, NoOps, we quibble over words.   What is DevOps?  We scratch at definitions to explain it.  I think the time has come for the confusion to end and for us all to accept the reality: we have entered a new age, the information age.  e-Commerce, e-Government, everything has changed as we’ve evolved with the coming of the internet.  We accept that business has changed forever, and that the way we interact with the word has similarly change, but we cling ignorantly onto the delusion that DevOps is a fad or that Agile may go as quickly as it came.  Its clear for anyone with ears to hear and eyes to see, the world has changed forever and there is no going back.

We look back at the renaissance and the reformation with romantic eyes, but these epic shifts in human evolution stemmed from a technological advancement: the printing press.  The printing press changed everything for everyone, but its effects took time to be felt.  No one at the time was quite aware of what was happening, but looking back in history it was clear to anyone that something momentous had occurred.

Similarly, the industrial age came to us because of mechanical technologies, namely the steam engine.  The industrial revolution was catalyzed into its modern form by Henry Ford and became known as “mass production” which we’ve clung tightly to ever since.  We’ve evolved past mass production only in terms of our philosophy thanks to what ultimately became known as LEAN.

And so now we’ve enjoyed for nearly 20 years an incredible new technological advancement, the internet, and all the hundreds of other innovations which enable and empower it.

Is it really any wonder that in this new, modern, information driven and electronic world in which we live, where the way in which we produce and consume goods and services has forever changed, that we should have to both adapt and create entirely new methods of managing production and business?  Agile & DevOps aren’t fads, they are masks we’ve put on the new era of Operations Management.

What use has this new world for an assembly line?  None at all.  But, the underlying idea, of automating the movement of product from one state of creation to the next, bringing the work to the worker and ultimately the consumer, does that have a place in the new world?  Certainly!  We call it Continuous Delivery.

In every era of major change, we haven’t thrown away the ideas of the past, rather we’ve learned from them, broken them down to core elements, and re-interpreted them for a new era.  Sadly, we are only ever aware of this in hindsight.

Its time for us to stop debating what DevOps is.  Its time to stop thinking the world hasn’t forever changed.  The world has changed and very much for the better.  DevOps has rallied and will continue to rally practitioners to its banner, but its time for people to wake up to the reality: whats called DevOps today will simply be the discipline of business and operations management 15 years from now.