Ars gratia artis: Art for the sake of art. It goes to bad places… you end up here with this famous piece: 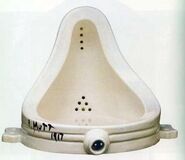 If you don’t know the story, the picture is of a famous art piece named The Fountain by Marcel Duchamp.  If you are an artist or great lover of art, it is an important work that has a bold place in arts history.  However, if you are outside that circle the piece simply reminds you of why you hate artists.  (You can have fun investigating the paradox of it all on your own.)

The point is this: anything done for the sake of itself is only of value to those within the inner sanctum.  If you look at most of the advice pumped out in various books, television shows, and story lines in movies you see this common thread, anything done for its own sake is ruin.

Like all good bloggers, I’m going to wow you by telling you something you already know and have heard a dozen times before, yet in a slightly new way, and then feel all clever about it.

I know that sounds ridiculous now, but think of all the other fads that have become dirty words.  Agile.  Kanban.  TPS/LEAN.  SOA.  ITIL.  ISO/27001.  CISA.  SOX.  CMMI.  ITSM.  Six Sigma.  ISO-9000.  SAS-70.  On and on and on.  This comes to mind because I just got a piece of email about a conference in Washington (which is the first sign its full of itself) and after watching several videos from years past I wanted to chew my head off.  At some point, surely, you’ve been at a conference or read a whitepaper or seen a presentation on YouTube that made you whisper “This guy needs to get out a little more.”

Anyone engaging in this type of feedback loop will ultimate be confronted with the criticism: “I think your missing the point.”  A little cult is formed and you speak in a secret language causing you to attend annual conferences with the other people who know your mystic dialect of acronyms and start using software by CA.

Standards.  Standards are why I’m really passionate about this point.  Ever met someone who worked for a company that adopted ISO-9001?  Did they like it?  No, they probably bitched about it for as long as you’d let them.  Or SAS-70.  People bitch like mad about SAS-70.  But the thing is that SAS-70 isn’t about what most poeple think it is, Statement on Auditing Standards (SAS) No. 70 simply standardizes a way of auditing a companies internal controls and their effectiveness.  SAS-70 does not itself dictate what those controls are…. but the auditors do.  ISO-9001 is the same, the standard is good, but the auditors want things done in a certain way, the way everyone else does them, regardless of whether or not they still fit the requirements of the standard.  And so they get a bad name.  ISO-9001 encourages quality control and establishes trust between organizations, but employees are shoe-horned into obsolete procedures that goes against the original intents of people like Deming.  The people who fight the auditors bitch, the people who embrace them openly become a special cult.

So… while we’re still in that warm fuzzy place with DevOps and Cloud and all the new forms of automation, embrace them only in so far as that you apply what is applicable and leave aside that which is not.  Solve problems, take the mountains of good ideas and make them your own, don’t build a shrine around them.