Recently release, Appleseed Ex Machina is a followup to the excellent CG/Anime fusion Appleseed release of 2005. Featuring a credit list that boggles the mind, including some “costumes” designed by Prada and produced by John Woo. 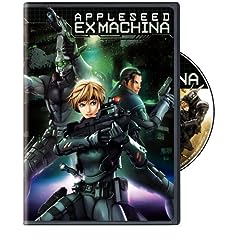 This release is completely independent of the 2005 release, backstory, etc, is all there and only the most subtle of reference between the two exists. The underlying story isn’t a terribly unique one, but as any fan of John Woo will attest, he has a unique ability to take something old and make it very new (example: Mission Impossible 2 was in fact a retelling of Alfred Hitchcock’s Notorious, with repeatedly striking similarity). There is even more “HOLY CRAP! YESSSSSSSSS!!” style action than the first, what it lacks in plot it makes up for in raw ass kicking power.

I should also point to the soundtrack. The music and sound effects were absolutely beautiful.

Visually the film is stunning. When I reviewed Appleseed some time back I noted that there were a handful of places where the CG/Anime just didn’t fuse entirely.. in this release no such mistakes were present and CG definitely was more prevalent, in many cases it was hard to tell what was drawn and what was CG, so the proper parity has clearly been found, something I wish they had found in Macross Zero where they opted more so the other way. If you have HD-DVD or BluRay you’ll definitely want the HD version.