The blogs getting a bit heavy… time to tone down a couple notches. Films are always a good topic…

Blade Runner is my all time favorite film. I first saw it when I was like 13 and doing a baby sitting job. (Yes, I did a lot of baby sitting as a kid, I earned enough one summer to pay for SCUBA lessons, gear, the works… sucked living in a family of non-divers, but was fun to get it.) I put the kid down to sleep and had like 2-3 hours to kill, so I rummaged around in a box of VHS tapes and there was one with just a bad label, written in a sharpy “Blade Runner”. The title alone was stimulating, had to be good! I imagined some dragon fantasy or something, but was blow away by what I found. It was a bad taping off HBO or something, the full US theatrical release with that horrible narration and all. Everything about the film blew me away and I was most excited by the hour afterwards that I sat on the couch in the dark just unraveling the story and philosophy buried within it, heavy stuff for a 14 year old kid.

While its an amazing film there are tons of little quirks in it. Painstaking effort went into the visual effects, but there are several “WTF?” blunders in there, such as Pris not looking exactly like Pris in the Deckard fight at the end, or the dove flying into the blue sky, and what exactly was that unicorn clip all about? Like many fans of the film these things don’t turn you off but rather engage your curiosity.

In the 4 disk Collectors Edition released in December we finally got all the answers. On Disk 2 is a painstakingly long 3+ hour documentary on the making of the film. I have never seen a documentary so candid and blunt in all my life. One of the producers wanted more sex, the visual effects department used the Millennium Falcon as one of the buildings in the city flyovers (I didn’t even notice that one before), and that “missing replicant” that was omited from the Bryant briefing was not actually Deckard but rather a character that they chopped from the film due to length and cost. As long as it was, it was worth every minute of it and paid for the disks in and of itself.

If your a serious fan you’ve probly already bought it. If your a fan of the film but haven’t, do yourself a favor and buy it! Don’t bother with the 2 Disk version, go for the 4 Disk which includes several variations of the film. If you are seriously die hard, buy the 5 disk ‘Brief Case”, which contains the oh so sought after “Work Print” version of the film.

If your film collection is kinda shabby, I recommend putting Blade Runner together with the recently re-released Patton: 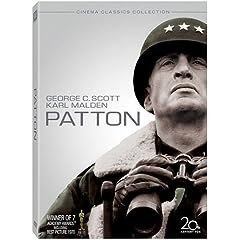 Patton is one of the greatest films ever made. If you’ve never seen it in its full glory you must have a run at it, the various lines and music in it are strung throughout our culture in ways that your probly not even aware. Its full glory is only matched by films such as The Right Stuff and Citizen Kane. (If you are snickering at Citizen Kane your a moron who needs to go watch the damn thing… Wells is amazing.)

Thanks to my favorite channel, TCM, I’ve gotten to better know James Cagney as of late. I watched all that I could and put the rest on the DVR. James Cagney is known far and wide as the father of all on-screen gangsters… but he’s so much more than that. There is a brilliance in Cagney that can’t be described. My favorite of his films were ones in which he plays the tough guy with a heart of gold. I think that element, more than any other, was the setup for the most beloved mob stories… sure he’s a tough guy that takes no lip and shots anyone that gets in his way, but he’s doing it because he loves his brother or his girl or whatever. There is always a sense, not matter how despicable his character, that he’s just doing the best he can to get through life.

One of the films I watch tonight was City for Conquest in which he plays a reluctant New York boxer. Its the kind of film that leaves a mark… you leave wanting to be just like Jimmy. He’s down to earth, so unlike Cary Grant or Jimmy Steward or Clark Gable you don’t feel like you have to move up the social ladder or be more suave or something, you just have to put your heart in the right place and roll with the punches life brings.

Now, that said, White Heat is close but far more gritty than any other pictures he’s done. The infamous line “TOP OF THE WORLD MA’!!!” comes from that film, and he’s utterly ruthless. If your into that HBO crap like “The Soprano’s” go and have a look at Cagney in that film. Holy crap man…. very little redeeming quality in that character, but damn he’s still got his reasons.

Of course, if you only see one Cagney film, let it be Angels with Dirty Faces, perhaps the most commonly known. I’ve seen that one several times over the years and I always love it. Its probly Cagney at his best.

Now… truth be told, my favorite “sit down and just be happy for 2 hours” genre is romantic comedies. Tamarah and I have watched When Harry Met Sally about 5,000 times… but the romantic comedies of the last 30 years have been lacking, at best. For real whit slinging you’ve got to go back to the 30’s and 40’s. The Thin Man, My Man Godfrey, and my favorite Love Crazy are some of the best comedies ever made, featuring William Powell and (excepting My Man Godfrey) Myrna Loy. These two probly describe Tamarah and I better than any other couple on screen, we aspire and revel in their chemistry. Behold!

Someone actually put Love Crazy up on YouTube in 11 parts… see if you like it, here’s the first part:

Just classic. If your tired of the horrible crap thats pouring into theaters, getting worse every year, don’t give up on film, just start digging into the past. The old the better. Chaplin, Cagney, Gable, Astaire, Crosby, Stewart, Grant…. there are hundreds of amazing films that you’ll love, you just don’t know it yet. TCM is always a good place to start. The rules are simple… black and white is better and never assume. The rewards are easy.. women (not teenage girls) of beauty and wit and charm, men of integrity, character and strength. If it helps, start with a Hitchcock film like Notorious (did you know that MI:2 was an adaptation of Notorious?) and work out from there.