Tamarah and I stopped in Target tonight to pick up Superman Returns and some diapers (husbands secret plot: buy a Wii) when I stumbled across something entirely unexpected and that I’d not previously been aware of: Superman II – The Richard Donner Cut. 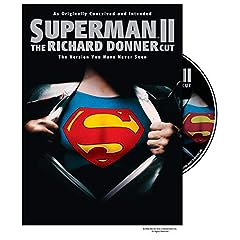 Tam and I just finished watching it and… wow. Un-frickin’-believable! Absolutely worth every single penny. This flick demands to be in any geeks library. Let me explain…

If you have ever watched Superman II and thought any of the following, you must watch this film:

My friends, I’m happy to report that if you’ve thought any of the things above you are, a) not alone, and b) Richard Donner totally agrees with you and never intended any of that crap in the first place.

Without giving any spoilers I’ll say that Louis is an surprisingly complex character, not the shallow whiny bitch she was drawn out to be. Superman isn’t as stupid, shallow, and nieve as he was made out to be when giving up his powers. Kal’EL hits you with a bomb that is extremely powerful, something you don’t see coming in the plot that explains a lot and gives any parent a really thought provoking lesson and insight…. Tam and I had to stop the film after that scene to talk about it. Also interesting is that the Superman Returns line “The father becomes the son, and the son becomes the father” is drawn directly from this film, and if it was in the “original” (ie: non-Donner cut) it was so weakly delivered that I don’t remember it.

I was entirely impressed with this cut. I’ll be honest and say that there were 2 things that didn’t make much sense, and I’m hoping that when I have time to listen to the full commentary they’ll be explained, but I’ll leave it to you to watch the film and figure out what those are. (Or likely wait for someone to put them in the comments of this entry.)

Speaking of films, while at Target I also picked up Superman Returns: Special Edition which looks awesome since I didn’t get to see it in the theaters and one that I’m really excited about, the new King Kong: Three-Disc Deluxe Extended Edition. I know a lot of people disliked King Kong, but honestly I found it exciting, deeply moving, and brilliantly created. Now I just need a 52″ Plasma… feel free to donate one to cuddletech for Christmas. 🙂